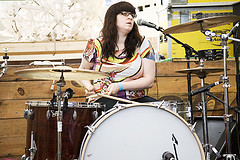 “Ali Koehler is the fearless former drummer of Vivian Girls and current drummer of the band on the tip of everyone’s tongue, Best Coast. Her success is admirable and is inspiring young drummers and musicians around the world. Attending a Best Coast show here in Philly last year, the crowd was completely in love. It wasn’t just the music that kept the crowd energized, it was the sheer confidence of Ali, Bethany, and Bobb. Ali Koehler is touring the world, jumping from festival to festival and seems to be in the midst of watching her dreams play out in front of her. We of course wanted to know a little more about the beat behind Best Coast. Check out our interview with this rockin’ lady! “

I Won’t Be Long

“The Vivian Girls’ third album, ‘Share the Joy’, hasn’t wandered far from the office stereo since its release back in April this year. Whenever we need a dose of spiky guitar pop, we know exactly where to turn. The trio are currently touring on the back of the release and we caught up with Cassie Ramone from the band for a bit of a Call Back.

Bowlegs: Which album has been a major influence in your life, and why?

Cassie: The Bananas’ ‘A Slippery Subject’. They are the band that made me realise you could combine punk with doo-wop and 60s pop song-writing. (…)”

“If this doesn’t happen to be your first ever time in the Addict interviews section, you’ll already know we don’t shy away from the lo-fi band crushes right now. Still, chatting to Vivian Girls feels like talking to the great-grandmas of garage pop: these ladies were swinging their fringes to scuzz-heavy songs before people like Big Deal and Bleeding Knees Club even had their recording equipment sorted. We caught up with them to hear about what it’s like being labelled Brooklyn ‘scenesters’ and why London shows are awesome. (…)”

Vivian Girls – “Take It As It Comes” Music Video

“Exclusive new 7″ from The Babies. Members of Vivian Girls and Woods. 300 pressed and each cover is handmade. Over the course of a couple months this past winter The Babies officially became honorary members of the LA Family, and the single is a testament to that. There is a Cassie/Nate version of the cover, and a Kevin/Justin version. Which one will you get? IT’S IMPOSSIBLE TO SAY”

The trio perform an acoustic version of ‘Sixteen Ways’, taken from new album, ‘Share The Joy’. 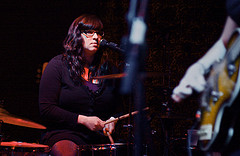 I just recorded this. It’s a song that I’ve had the verses to for forever but could never think of any other parts and then I said fuck it, it’ll just be a song of verses. Who cares.

A nice bum-out song about being bummed out. (…)” 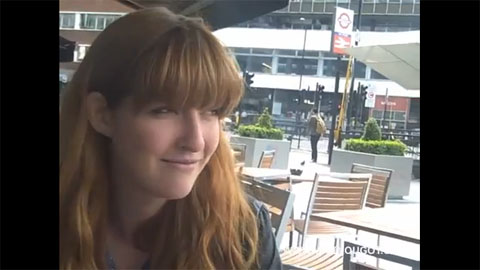 “It’s been three years since the lo-fi garage punk sound of the Vivian Girls’ critically-acclaimed, self-titled debut album – accompanied by some particularly outspoken interview comments – polarised opinions across the worldwide blogosphere. We chatted to guitarist and frontwoman of the Brooklyn trio, Cassie Ramone, ahead of the girls’ first ever show on Hong Kong soil.”

“Having just caught their set at Knitting Factory a few weeks prior, I felt more up to speed with what The Babies were up when they kicked off the proceedings at the Northside Festival’s outdoor stage in McCarren Park.  I actually preferred this set to the Knitting Factory set, partly because the daytime outdoor setting was the perfect way to experience Cassie Ramone and Kevin Morby’s laid-back garage rock.  It didn’t hurt any that the outdoor PA mix was surprisingly strong, making for a recording that captures the artists’ vocal interplay perfectly.  One easy test of a band’s staying power is how well they hold up to repeated listens – especially live shows – in a short period of time.  Already, songs like “Breakin’ the Law”, “Sick Kid” and “Here Comes Trouble” feel like fantastic summer jams for this season and beyond.”

“Brooklyn band Vivian Girls might just be the coolest folk in New York right now. Their PR is filled with hipsterlicious photos of the band, and the artwork on their new album, Share The Joy, is hand drawn in a kind-of-endearing, kind-of-purposeful way. Hoping that vague association would make us cool, or maybe just because we really like the album, we asked the band to take us through the new record track by track…”

“Three young ladies — none of them named Vivian, but collectively known as the Vivian Girls — will play a Tuesday night show at Muddy Waters, that laid-back coffeehouse with beer in Santa Barbara. The band members are certain to showcase some truth in advertising when they play a few tunes off their third and latest album, “Share the Joy.”

The group qualifies as prolific with three albums, having started this crazy adventure back in 2007 in Brooklyn. The gals in the band include blond Cassie Ramone on guitar and vocals and redhead Katy Goodman on bass and vocals. These two went to high school together in New Jersey but look like a couple of surfer girls who stepped out of a Beach Boys song. (…)”

“When we first saw The Babies at the beginning of last year (that recording here), they were a brand-new band mostly known as a side project of Cassie Ramone of the Vivian Girls and Kevin Morby of Woods.  They rocked the hell out of Glasslands that night and left us wanting more – especially a new record.  More than a year later, they gave us what we had hoped for in the form of a delightfully just-polished-enough eponymous debut album on the Shrimper imprint.  This Knitting Factory show, opening for Times New Viking, found them working through many of the album tracks as well as some new and unfamiliar numbers.  While the band’s sound owes more to Ramone’s Vivians than to Woods, the Babies have developed a solid identity of their own, marrying some of the surf vibe of the Vivians with a slightly harder-edged sound.  We expect many more good things from the Babies – but in the meantime, just don’t call them a “Brooklyn Supergroup”.

I recorded this set from the same location as the Times New Viking recording, with the AKG large diaphragm mics set to a tighter pattern to reject more reflections from the room, as well as a soundboard feed.  This one is probably the best recording of the night.  Enjoy!”

Vivian Girls are hard at work on the new music video for their track “Take It As It Comes.” Above is a still of the band in their zebra-print, Neil Young-laden bedroom from the upcoming video. Click the link below to head over to the Polyvinyl soundcloud to stream “Take It As It Comes” from their recent Polyvinyl debut Share The Joy.

More About Vivian Girls
Purchase Share The Joy
Stream “Take It As It Comes”
source: http://www.polyvinylrecords.com/news/index.php?id=1018

“I’m so excited today to bring you an interview with one of today’s smartest musicians in one of the most intelligent bands, Cassie Ramone of Vivian Girls. With their newest album, Share the Joy, released this year, it’s absolutely worth noting how brilliant of a move it was. Instead of finding themselves painted into a corner like many other lo-fi groups, they delivered this remarkable growth in a single album, which is why as great as their follow up to their debut was, Everything Goes Wrong can be seen as sort of a place holder Share the Joy. Suddenly, you realized that they had something to say, that there always were brilliant lyrics, ideas, and melodies there, you just couldn’t hear them. (..)” 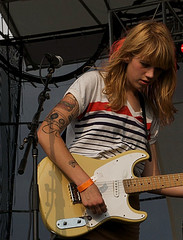 “I put a BUNCH of new drawings and stuff on my Flickr! http://www.flickr.com/photos/cassieramone“

“Kickball” Katy Goodman is one busy artist. When she’s not busy with her primary band, the noise-pop trio Vivian Girls, she’s working on her solo side project La Sera. With La Sera, Goodman stepped into the shoes of a songwriter and picked up her first guitar in early 2010. Since then, she has toured Europe and across the nation, opening for acts such as Jenny and Johnny, Dum Dum Girls, and Tennis. And last Saturday, she played on the main stage at Make Music Pasadena, a free outdoor music festival in Pasadena, CA. After her set and personally selling her merch on the sidewalk to fans, I had a chance to speak with her. (…)