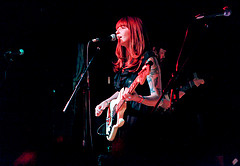 “We here at Holocene wanted a little bit of insight into Katy Goodman’s life on the road and relationship with Portland, so we shot her over a few questions. Find out how she stays sane on tour and make sure to come out and see her play as La Sera on Sunday!

This is your second time back at Holocene. What was your favorite part about Portland the last time you were here? Anything new you’re excited to check out?

I really love the food in Portland! Also, my Vivian Girls bandmate Fiona lives there now, so it’s always nice seeing her.
(Fiona plays in Coasting — catch them here on Monday night! – ed.)”

Starting out as the bass player for indie-punk trio Vivian Girls, Goodman provided a charging throb and backing vocals that were at times both soothing and haunting. With their debut, The Vivian Girls established a unique combination of classic punk, Motown harmonies and shoegaze fuzz.

Right now, The Vivian Girls are on break, so Goodman is planning to release her second solo LP under the name La Sera, in March, called La Sera Sees The Light. While the first La Sera, Self-titled LP was a swirling mass of layered, heavenly choruses, the new release is just a little meaner, a little sharper, and a lot more direct… it’s almost as if Goodman herself has undergone personal illumination.
To find out what caused this clarity, staff writer John Gentile rang up Goodman to talk about the new LP, her life as a ginger and video games. “

“Late night country recording session with @drew43 … we did an Iris Dement cover! Drew on guitar, me on singing http://soundcloud.com/laseramusic/let-the-mystery-be“

“In this episode of Party Pics, we checked out the Babies, an indie rock supergroup that features members of Woods and the Vivian Girls. Photographer Joe Perez photographed the band at the Clocktower Gallery, a performance space and venue perched atop the Criminal Court in downtown New York.

For more information about the Clocktower, head to artonair.org.” 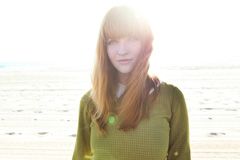 “Kickball” Katy Goodman of the Vivian Girls has returned for another round with her shimmering, harmony-soaked solo project La Sera. Her second solo album, Sees the Light boasts “peppy break-up pop” and this taste is certainly no exception: “Break My Heart” is a C86-inspired gem that washes its feet in surfier shores.

This is a pretty fantabulous six months for Vivian Girls past and present: Drummer Fiona Campbell blessed us with a post-punk blurt from her band Coasting and ex-Vivian Frankie Rose is weeks from dropping her girl-group space-pop masterwork Interstellar, which you can still hear in full via the fine folks at SPIN. Plus DJ Cassie Ramone did a pretty awesome job holding down the decks at this years Bruise Cruise.

Sees the Light is due March 27 on Hardly Art.”

Listen to the song: http://www.spin.com/articles/hear-la-seras-break-my-heart-latest-vivian-girl-katy-goodman?utm_source=spintwitter&utm_medium=social&utm_campaign=spintwitter

“Vivian Girls have teamed up with award winning designer Kate Spade for a series of Pop Up Shows to highlight the company’s new Florence Broadhurst line throughout the US. The first of these shows took place in NYC on Feb 10th in Gansevoort Plaza, housed inside a converted tour bus parked to the side of the stage.” 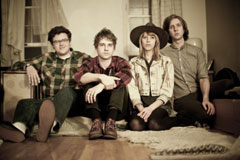