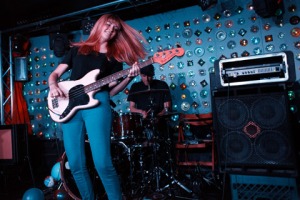 “Katy Goodman is authentically one of the nicest people in the indie music scene. Its hard to fathom how someone could be so positive, always smiling and so friendly to seemingly anyone she encounters. Its very easy to root for the success of someone with her disposition — and its especially true given the excellent quality of La Sera’s new album Hour Of The Dawn. At the CD release show for the album at Baby’s All Right last month, La Sera played to a packed room of admirers and the smiles were all around. The band played through seven of the nine tracks of Hour and a couple of older songs before closing the set with the title track. We’re streaming that performance below. It featured an extended guitar interplay between Todd Wisenbaker and Greta Morgan — during which Katy jumped into the crowd and played her bass among the fans. The humorous part of the show and part of what makes Katy so likeable is that she spent much of the encore break apologizing to the fan who got hit by the neck of the bass in the audience. The fan said no problem, all was forgiven, and the band ended the set with a rollicking encore. La Sera will begin a European tour in May (dates here), that includes an appearance at the Primavera Sound Festival.

This set was recorded on the installed Multitrack system at Baby’s All Right by sound tech Devin Foley and we mixed the raw files. The sound is pro-quality. Enjoy!”

Oh, the Vivian Girls. You know you’ve been around awhile when you have witnessed the entire life cycle of a band like this. It wasn’t that long ago, to us, that our then-young site was covering an up-and-coming all-female band at places like the East Village Radio Fest and some extremely random ToddP venues. Pretty soon, like any good little band that could, the Vivs were playing spots like Bowery Ballroom. They were loved, yet not universally so, and maybe that’s as clear a sign as any that they mattered. As so eloquently summed up in Jenn Pelly’s comprehensive Pitchfork piece, if you didn’t like the band because they were “lo fi”, if you didn’t like the band because they weren’t avant-garde or music school enough, well, that’s on you. The Vivs wrote good songs. They wrote songs that sounded good in the spaces where their people were, in shitty apartments and on shitty rented PAs and, yes, on those shitty white iPhone headphones, by then ubiquitous. In their moment, as an all-female guitar band, they broke ceilings, too.

Babies is the new band formed by Cassie Ramone of the Vivian Girls and Kevin Morby of Woods. The band’s sound however bears very little stylistic resemblance to either. Last night at Glasslands, the quartet performed a nine-song twenty-seven minute set of straightforward girl-boy vocal guitar rock with an electric stage energy sometimes not seen from their more sedate day job bands. The result was one of the more rambunctious crowds in the many times we have been to this Brooklyn art space venue. While the band’s MySpace page features the two recorded tracks from Babies thus far, last night’s set contained enough solid material for a full length album that we anticipate will see release this year.

We recorded this set from directly in front of the soundboard area and mixed two microphones with a two-channel feed from the board. The sound quality is excellent. Enjoy! 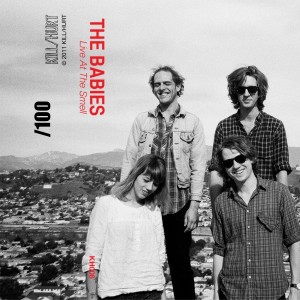 “After many months of mixing, coordinating and putting all the pieces together — it’s here! Relieve the Babies’ January visit to Los Angeles with this live (!!) tape, recorded by us at the Smell. There’s only 100 of these in existence, but less than half remain after the presale, so you should act fast!

Comprised of members of Vivian Girls, Woods and Bossy, the Babies aren’t your average “indie supergroup”; they’re a dynamic, exciting band with their own distinct, catchy lo-fi sound that’s unlike anything produced by their other musical projects. From the jammy, sing-along “Caroline” to Cassie Ramone’s and Kevin Morby’s back-and-forth vocals on “Breaking the Law,” this Brooklyn-based band’s infectious brand of garage rock just might be one of the best things you’ll hear all year.

Recorded by Chris + Kat of Kill/Hurt at legendary DIY venue the Smell, KH008 captures the entirety of the Babies’ set from their January 2011 visit to Los Angeles.

Live at the Smell is limited to 100 copies, dubbed by Kill/Hurt onto a shiny blue C40 cassette and features artwork by Cali DeWitt of Teenage Teardrops.” 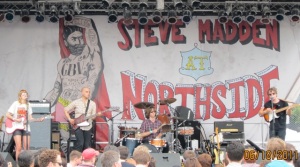 “Having just caught their set at Knitting Factory a few weeks prior, I felt more up to speed with what The Babies were up when they kicked off the proceedings at the Northside Festival’s outdoor stage in McCarren Park.  I actually preferred this set to the Knitting Factory set, partly because the daytime outdoor setting was the perfect way to experience Cassie Ramone and Kevin Morby’s laid-back garage rock.  It didn’t hurt any that the outdoor PA mix was surprisingly strong, making for a recording that captures the artists’ vocal interplay perfectly.  One easy test of a band’s staying power is how well they hold up to repeated listens – especially live shows – in a short period of time.  Already, songs like “Breakin’ the Law”, “Sick Kid” and “Here Comes Trouble” feel like fantastic summer jams for this season and beyond.” 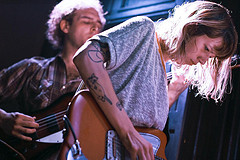 “When we first saw The Babies at the beginning of last year (that recording here), they were a brand-new band mostly known as a side project of Cassie Ramone of the Vivian Girls and Kevin Morby of Woods.  They rocked the hell out of Glasslands that night and left us wanting more – especially a new record.  More than a year later, they gave us what we had hoped for in the form of a delightfully just-polished-enough eponymous debut album on the Shrimper imprint.  This Knitting Factory show, opening for Times New Viking, found them working through many of the album tracks as well as some new and unfamiliar numbers.  While the band’s sound owes more to Ramone’s Vivians than to Woods, the Babies have developed a solid identity of their own, marrying some of the surf vibe of the Vivians with a slightly harder-edged sound.  We expect many more good things from the Babies – but in the meantime, just don’t call them a “Brooklyn Supergroup”.

I recorded this set from the same location as the Times New Viking recording, with the AKG large diaphragm mics set to a tighter pattern to reject more reflections from the room, as well as a soundboard feed.  This one is probably the best recording of the night.  Enjoy!”