“We wanted to let you all know that Jenn has left Upset to work on her own projects. We wish her well and are very grateful to have started the band and recorded the first album with her. Her lead guitar on our debut album She’s Gone and her song Game Over were crucial parts of founding and developing our sound. Here’s to moving forward and opening new doors!“

Los Angeles has always been a mecca for music, like fellow NYC and Chicago metropolises. While ups and downs are unavoidable, as of late, LA has been able to find its footing, with new acts like Fidlar and Cherry Glazer, among others, to come of the City of Angels. The newest member to this club is the all girl pop punk outfit, Upset.

Upset is a supergroup of sorts, consisting of former drummer of Best Coast and Vivian Girls, Ali Koehler (guitar/ vocals), Jennifer Prince (guitar) formerly of La Sera, and Patty Schemel (drums) of Hole fame. Upset released their debut album, She’s Gone, in October of 2013, on Don Giovanni Records. They are about to hit the road with White Lung, and have released a brand new track “Linus” to commemorate the tour. “Linus” is a throwback to an early 90’s alternative pop punk. 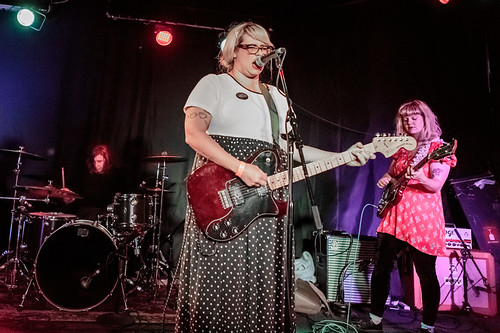 This event is all ages

The final Pub Night of Spring 2014 — in a special evening cosponsored by KXLU — features Evelyn McDonnell, Assistant Professor of Journalism and New Media in the LMU English Department.

Professor McDonnell will be discussing her critically acclaimed book Queens of Noise: The Real Story of the Runaways.
All Pub Nights are free and open to the public. Pub refreshments and snacks will be served, KXLU DJs will be doing their thing, and copies of Queens of Noise will be available for sale and signing.

The Pub Night will be followed with a concert down on the bluff next to the library, featuring Upset, an awesome all girl supergroup featuring Patty Schemel from Hole, Ali Koehler from Vivian Girls, and Jenn Price from La Sera.

Rock Dreams: Upset Is the Punk Rock Supergroup You’ve Been Waiting For

“Upset has the makings for being one of the best bands out there right now and surprise, surprise: they totally are. Former drummer for Best Coast and Vivian Girls, Ali Koehler, takes on guitar and lead vocals, ex-La Sera member Jennifer Prince sings and plays lead guitar, and last we have drummer Patty Schemel of Hole and Death Valley Girls fame. The trio’s collective punk roots shine through on their latest project, Upset, the band you wish existed when you were in high school. The twelve pop-punk songs on debut album She’s Gone channel reckless teenage angst, addressing problems including but not limited to: mean popular girls, fun hookups, unrequited crushes, and feeling like you’re gonna throw up on the first day of school. Ali’s polished vocals contrast perfectly with Jennifer’s pop-punk riffs and Patty’s speedy but steady drumming. Listening to Upset will make you wanna yell at your parents, lock the door to your room, and watch Heathers on repeat. We chatted with Ali and Jennifer about punk shows, SXSW, and 10 Things I Hate About You.”

“In a little more than five years, Ali Koehler’s managed to do what some musicians spend their whole lives trying to do. Opened for Weezer? Check. Played on Letterman? You betcha. Toured in Tasmania? Crossed off the list. Started a band with Patty Schemel? Duh.

Since joining Vivian Girls in 2008, Koehler–who’s left her mark in Vivian Girls, Best Coast, and her new project, Upset–has experienced all the highs and lows that come with being on the road for much of the past few years. You name it, Koehler’s probably seen it, or at least been pretty damn close to it.

I caught up with her after Upset’s jaunt to SXSW to ask about tour plans, the finality of Vivian Girls’ last shows, and favorite bands. (…)”

UPSET is singer, songwriter, and guitarist Ali Koehler (you may remember the calendar she co-curated in January) plus guitarist, singer, and songwriter Jenn Prince (check out the mixtape she made for this week’s issue), newest member Rachel Gagliardi (of SLUTEVER who I’m sure you remember we interviewed once) and drummer Patty Schemel (who we only hope will one day write an advice column for us). If UPSET weren’t already on your radar via their excellent 2013 LP for Don Giovanni Records, She’s Gone, perhaps they will be now with this gem of a hardcore cover. In advance of their upcoming tour to Texas, UPSET have released their take on 7 Seconds’ “Not Just Boys Fun,” a song that kind of sounds like it was meant to be sung by Koehler all along: “You feel so fucking threatened / When they stand out in front / A stupid, passive piece of meat is all you really want / But it’s not just boys’ fun / not just boys fun / NOT JUST BOYS FUN / NOT JUST BOYS FUN.” Check it out above. All of the band’s tour dates below, which definitely includes a date with Lil B. Take us with you? xox

We have been putting on a “Sunday after SXSW” show for 7 years and this is the probably the strongest starting lineup in our history. Besides the awesomeness of TY SEGALL, we have some repeat offenders from over the years like DUM DUM GIRLS and The COATHANGERS. Tickets are only $19.99 in Advance! Yes, $19.99 and more bands to be added in the coming weeks. Here is the first round of bands playing this year’s SPILLOVER MF 2014:

LOOK OUT FOR OUR N.I.P. – Not Important Person package for an especially miserable experience and a t-shirt… and double the price.